Anthelia, my Enemy to the End! 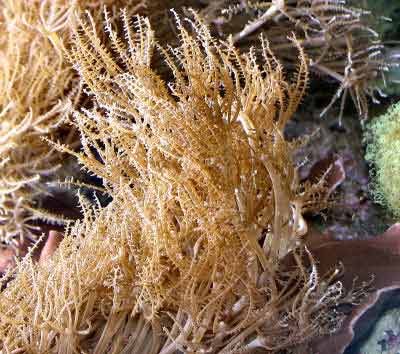 I remember back when I first started this hobby any coral that I could keep alive and grow was a cool coral.  I would buy these corals and just love the fact that I had real corals growing in my tank!  Now that I'm a little wiser I know there are some corals that just create problems.  Some are very invasive, fast growing (in a bad way) and some like to fight with their neighbors, sending out sweeper tentacles that kill any other coral close by.

Well, several years ago I went to a local club tank tour and there was a tank with a bunch of anthelia.  The owner was a great guy and giving frags of it away for free.  At the time I thought the anthelia looked kind of cool, and who am I to turn down free frags, so I took a little bit home and put it in my 120g tank.  Ever since that faithful day I've been battling that stupid coral.  Not only was it invasive but it grew so fast I couldn't control it.  It would grow up the walls of my tank, including the overflows and the return pipes.  It would block the teeth in the overflow and partially block the return flow.  It would even fill in areas around other corals and slow their growth.  I swear I would go on hunting sprees and tear out buckets of the stuff (speaking of which the moment that coral touches air it gives off a horrible smell).  No matter what I did it would always grow back.

Now that I'm upgrading to a 180g tank I've been busy moving fish and corals over to the new tank.  I've tried to keep any anthelia from making the journey over to the new tank.  Today was the final moving day.  Everything was out of the 120 and life in the 180 appeared to be doing fine.  The 120 was drained and I arraigned for my brother to come over and help me carry the 120 out of the house.  Now comes the part that I call "anthelia revenge."  Remember when I mentioned that anthelia gives off a horrible smell when it hits the air?  Since there was a bunch of it all over my overflows it started giving off its killer stench right away.  Next thing you know my brother calls me and he can't make it over tonight.  Now I am stuck with the tank in the house all day and all tonight!  My entire house smells like drying out anthelia!  Even in death this anthelia mocks me...

Anyone else have a coral that they hate or should have never bought?  Kenya tree, green stars??

Comment by Skipper on August 21, 2011 at 7:44pm
Oh yea, there are bunches of hitchkikers that would make the "unwanted" list lol!