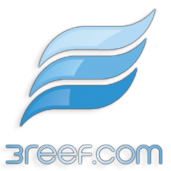 For members that belong to 3reef.com as well so we can find each other easier.

This group does not have any discussions yet.

You need to be a member of 3reef.com Members to add comments!

Has anyone had success growing Coralline Algae under only blue actinic lighting (460nm variety). "I have a box of rocks" I am maintaining from the breakdown and selling off my 90 gallon reef tank. I plan on keeping the 200lbs or so of live rock (the most expensive part of my next setup down the road) So I don't have to reinvest in LR at that time.

It is all doing fine. It is in a ~60 gallon "flat" tank I used to use as my fuge. There is a SCWD on the bottom, and a heater. There are a couple of Hydor Korillias for upper and mid flow, a BH90 skimmer and (if you will please excuse this) just a bio-wheel type mechanical filter (no wheel) that I have to still change out almost daily from silt as the tank is bottomless.(no substrate),

There is a file fish that keeps any aiptasia in check (I saw a few, so added the fish...all gone). There is a cleaner shrimp, a fire shrimp and a 6-line wrasse I also kept. I know what you are thinking, but it's been months, and I have seen the cleaner shrimp jump onto the file fish to clean, and have seen the fire shrimp attack it a couple of times. This is a matted file fish, and despite it's occasionally reported tendency to pick at inverts all the time, this doesn't apply so much to the Matted FileFish as opposed to most all others species of Filefish..That being said, I think I got lucky with this one in particular, very benign.

But I digress, the live rock lighting issue is what is on my mind. I am wanting to switch to all actinic blue on the T5's, with an LED spot on the few corals I see that should be kept, a pink birds-nest frag that stayed on a rock for example (You can see the Mother bird-nest colony i parted with now on display at Saltwater FantaSeas in Portland Oregon,just off Sandy Blvd and 107th actually. It is a beautiful specimen).

Again, back to the point; 460nm Actinic blue light and high current for coralline algae growth, has anyone tried that?

So, I am Eddie on 3reef, How does that work or apply here?

doing good and you

No big plans for Thanksgiving or Christmas this year. Probably having thanksgiving here at home, with Dad, maybe my brother. Sister might come down.

For christmas we are getting a fake tree, maybe putting up christmas lights on the porch.

Going to an event like that to represent MeetReef would be really cool, Haloist. The best of luck to you, next year.

I went to the Midwest Marine Conference today...it was an ok experience. More like just a frag swap though. No new products, and nothing near as cool as reef-a-palooza. There wasn't much to see today.

I have a thread on 3reef if anyone wants to see it.

It's a convention for reefers in southern california, a lot of the big companies were there to promote their products.  i'm sure someone will have a picture post on 3reef soon.  Lots of frags and cool stuff. lol

tired,busy,beat,wore out.How are you doing